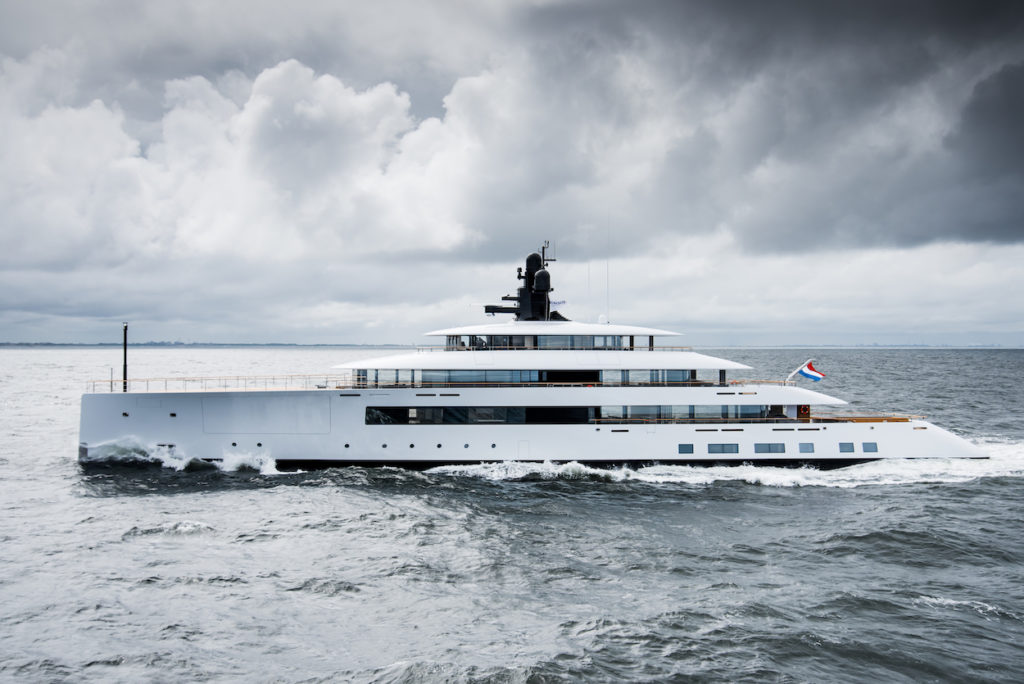 The BOAT International World Superyacht Awards are said to recognise the ingenuity and craftsmanship of the most remarkable luxury yachts from across the world.

The winners were revealed at a virtual ceremony. Some 57 nominees were presented to the panel of 20 current and former yacht owners.

“It’s been another exceptional year for the superyacht sector with some ground-breaking designs in this year’s entries. The winners of these awards represent the absolute pinnacle of yacht design and construction and, on behalf of the team at BOAT International, I’d like to offer heart-felt congratulations to this year’s winners,” says Stewart Campbell, editor-in-chief of BOAT International.

Highlighted winners from Boat International include:

Refitted Yachts: Oasis (59.4m)
Italian studio, FM Architettura d’Interni, refitted this legendary vessel to make it useful for three generations of its owners’ family. The main focus of the redesign was creating flexible living areas in preparation for the yacht’s first summer season with the new owners and their three-generational family. This included a redecorated sundeck, master cabin and the yacht’s public saloons to make them suitable for contemporary lifestyles.

Rebuilt Yachts: Vagrant (40m)
Rebuilt by the Royal Huisman shipyard over a 22-month period, Vagrant was first designed by Nathanael G Herreshoff and launched in 1913. Vagrant was completely stripped out, with her interior and deck woodwork carefully taken apart for preservation. The hull was sandblasted, thin plates replaced, and all her rivets welded in place to avoid potential future leakage. All engine room equipment, wiring and piping was completely replaced at the Dutch yard, while her woodwork was repaired and restored where possible. The detailed work undertaken to preserve this magnificent yacht will allow her to sail for another 100 years.

Support Vessels: Hodor (66m)
Built on a catamaran platform, Hodor’s 22.5-knot top speed is sufficient to outrun her mothership, making her able to prepare tenders and toys for immediate use when the mothership arrives and, on departure, pack up, overtake, and repeat the process. Hodor carries five tenders, the largest of which has a 17m overall length, and a whole host of toys. There are nine jet skis and four quadbikes, two all-terrain vehicles and two trail motorcycles, and two Laser dinghies and a Hobie Cat. In addition, there is also a submarine that is housed in a garage on the main deck.

Sailing Yachts and Sailing Yacht of the Year: Canova (43.3m)
The eco-focused, 43.3m Canova was built by Baltic Yachts and designed by Bruce Farr as a fast cruising yacht. The judges admired her high quality of build, attractive lines, excellent layout, and innovative technology. Canova boasts ground-breaking innovation with her Dynamic Stability Systems foil, whose proven ability to reduce heel, increase speed and improve the comfort of the ride might just persuade more owners to build large sailing yachts. Canova took home two awards due to the ground-breaking DSS and environmental technology, but also the calm practicality of her interior design by the Milan-based Lucio Micheletti, and a general arrangement plan that placed the crew aft in excellent quarters.

Semi-Displacement or Planning Motor Yachts Below 500GT (30m to 34.9m): IV Dreams (32.8m)
IV Dreams provides a well-balanced blend of good design, quality build and desirable facilities. The first of a new series from Custom Line, a member of the Ferretti Group, IV Dreams impressed the judges with its modern exterior styling, whose flowing lines incorporated large outdoor areas on the sundeck and foredeck. IV Dreams has four ensuite cabins – two doubles and two twins – each equipped with a Pullman berth, providing high-quality accommodation for guests. Additionally, the judges were impressed by the beach club that doubles as a tender garage and the well-designed crew quarters.

Semi-Displacement or Planning Motor Yachts Below 500GT (35m and Above): Mangusta Gransport 45 (45.3m)
The 45.3m yacht provides excellent seagoing comfort and an extremely long range of 4,850 nautical miles. The yacht’s extensive deck areas were admired for the good use made of every square metre, while the beach club stern, with its three openings to the sea, was seen as most desirable. Large windows in the main saloon, some opening to the side decks, made for another light and airy space, with good connectivity to the surrounding seascape.

Displacement Motor Yachts Below 499GT (30m to 34.9m): The Beast
The grey camouflage paintwork of this vessel suggests a small warship, perhaps a patrol boat, but this disguise was just one element of the owner’s detailed specification. Despite its forbidding, military exterior style, The Beast boasts deck spaces tailored for leisurely outdoor living, while concealing a luxurious fully featured interior. As an enthusiastic sport fisherman, the owner’s key requirement called for the ability to carry, and safely launch, a 13m, 19-tonne sport fishing vessel. The judges were also impressed with the launching system for the sport fishing boat, with a safe two-point lift provided by a pair of large knuckle-cranes.

Displacement Motor Yachts Below 499GT (40m and Above): Bintador (49.9m)
Bintador was recognised for her modern exterior styling, practical layout of its decks and interior and the manner in which its interior volume was equitably shared between guest and crew areas. Bintador’s fuel economy also impressed the judges – a result of a refined hull shape and her being fitted with two 895kW diesels that are significantly smaller than those of her competitors. She is, nevertheless, able to reach 18 knots – a higher speed than her competitors by a clear 2 knots – because of her 300kW electric motors.

Displacement Motor Yachts Between 500GT and 999GT: Najiba (58m)
Built at Feadship in Holland, with naval architecture and styling from Philippe Briand and his Vitruvius Yachts brand, Najiba’s numbers are phenomenal for a 58m yacht. Her top speed of 17-knots and her economical fuel burn at 12-knots demonstrated an extremely efficient hull design. Najiba’s interior layout, was considered fresh and innovative, particularly the yacht’s main entrance from the stern platform that rises up a central stairway from a reception area to the main deck aft. From here, arriving guests pass directly into the main saloon, a room that provides their first introduction to the much-admired work of the yacht’s Paris-based interior designer, Studio Liaigre.

Displacement Motor Yachts 5,000GT and Above: Flying Fox
At 136m, Flying Fox contains a beautiful, neutrally toned interior featuring dining tables for 22, a plant-filled double-height saloon, a winter garden observation saloon, and a world-beating spa and water sports centre set over two decks incorporating the first cryo-sauna seen on a yacht. The judges considered her to be an exceptional vessel, not only in technical achievement, but also for her owner and guest facilities, interior layout and extremely high quality of construction.

Voyager’s Award: Dorothea III
Starting in Fort Lauderdale in January 2018, Dorothea III, a 45m Cheoy Lee motor yacht designed by Ron Holland, owned by Steven and Dorothea Green and captained by John Crupi, completed a 34,965-mile voyage, taking in the North and South Atlantic and the Pacific Oceans. The voyage is particularly notable not only for its huge range but also for acts of philanthropy that raised $28,000 for humanitarian causes along the way.