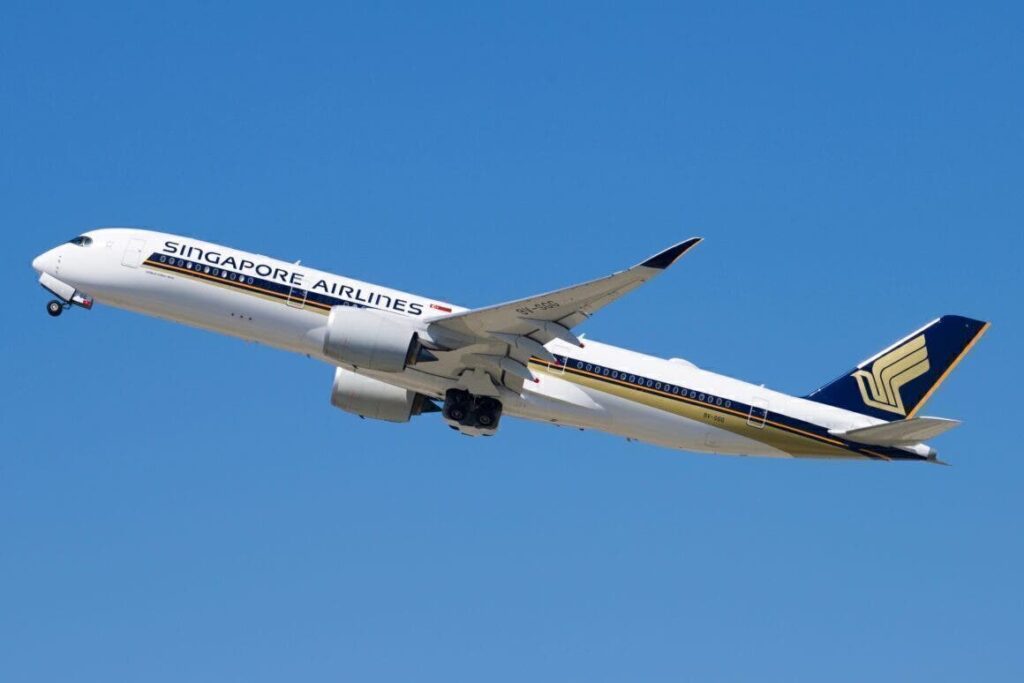 As aircraft efficiency and performance improve and fuel prices stay low, we are seeing a rise in extremely long flights. While direct flights between distant cities are appealing, will passengers really want to spend so long in economy class? Some things can help, but it will still be an endurance exercise.

The newest aircraft, such as the A350, Boeing 787, and the upcoming 777X, offer many advantages. They are more efficient and cheaper to operate and are pushing range further. Combined with low fuel prices, this has led to longer flights than ever before being introduced in the past few years.

Singapore Airlines currently flies the longest ultra long-haul route from Singapore to New York route – 15,358 kilometers. There are many other though – including Qantas’ longest route of 14,500 kilometers from Perth to London. Qantas has also operated direct flights from Sydney to London and New York. These were test flights as part of its Project Sunrise, but it plans to launch these commercially with new A350-1000 aircraft, perhaps as soon as 2024.

At just over 17,000 kilometers, Sydney to London would be an up to 20-hour flight. Qantas sees the business case for these flights obviously lying with passengers prepared to pay for the convenience of direct flights, rather than making stops or transfers. Post-COVID, this could be boosted by changing travel and entry restrictions for connecting countries and passengers keen to minimize contact and exposure. 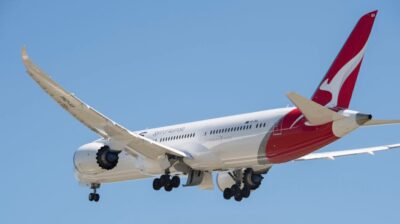 All about the cabin

As with any flight, comfort and enjoyment will come down to the seat and personal space. It is much easier to cope with a suite or just a flatbed and table area than a row of three standard economy seats. 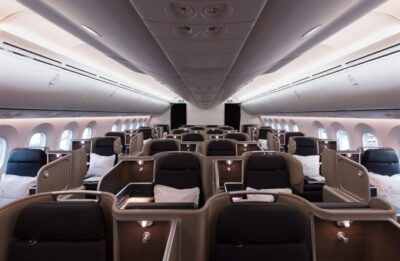 20 hours in business or first class is much easier – what about economy?

Singapore Airlines sets the bar high with its ultra long-haul flight to New York. It uses a specially modified A350ULR aircraft and fits it out with just business and premium economy class. Qantas does not plan this for its London or New York and says it will equip the A350-1000 with four cabins and a capacity of around 300 passengers. In reality, most airlines are likely to do this. The economics of having a business-heavy aircraft may work out for some routes, but economy class is going to be needed for most. 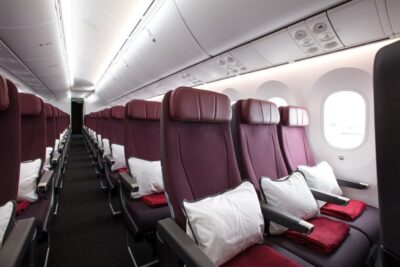 Qantas has indicated it will develop a new cabin for these flights on the A350, but nothing has yet been revealed. For London to Perth with the 787, it used its standard economy class. Despite this, the route was popular, achieving an impressive 94% load factor. This, of course, would also mean a busy economy cabin.

Qantas’s early ideas under Project Sunrise included bunk beds, gyms, work, café spaces, and even a creche. But as reality hit, the airline dropped these. Hopefully, though, there will be some provision of more comfortable seats and perhaps a bit of extra room. Although, as we have seen many times, this is not a direction many airlines tend to move in. There are some ideas around though that could help, such as staggered seating. 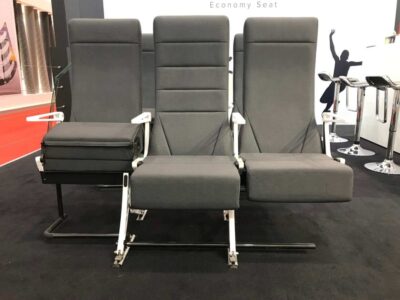 Rebel.Aero has proposals for a new seat, more spacious with a staggered layout

Simpler additions, such as better noise-canceling headsets and virtual reality headsets, could help. This can make a surprising difference to a flight, just as passengers found in the early days of inflight entertainment reduction. Better (and affordable or free) internet access and charging ability will also greatly help. 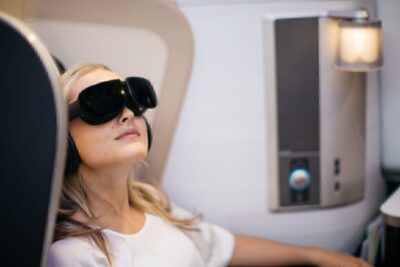 BA has trialed VR headsets onboard.

Cabin space will also be critical.  To survive 20-hour flights, passengers will want to move around, which needs to be recognized by airlines. Having larger bathrooms and dedicated space away from the seat will definitely help.

Looking further ahead, we might see more significant advances to economy class that will help ultra long-haul. Cubicle-style seating is possible post-COVID, and this would aid privacy too.  Double-deck seating has also been discussed and could realistically offer lie-flat seats in economy class. A proposal for this from Zephry reached 700% of its funding target earlier in 2021 – something that airlines surely cannot ignore. 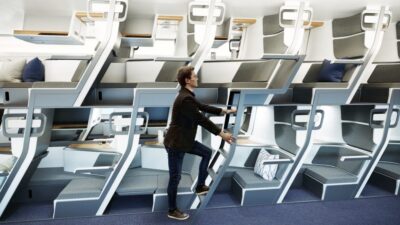 Seating is not the only way to make flights better for passengers. Qantas Project Sunrise flights have involved extensive tests and experimentation with passengers (and crew). This has involved exercise, stretching, and even yoga onboard. A great idea, but this is very much up to each passenger. And will there really be space in a full economy cabin for anything meaningful to take place? 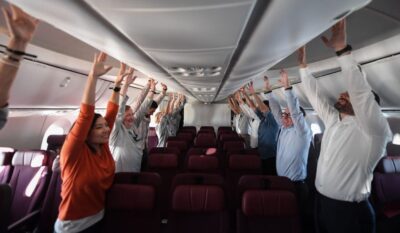 Exercise is a great way to get through a long flight well, but airlines will have to think about space.

Food and drink are another consideration. Getting this right could make passengers more comfortable. Again, Qantas has experimented with this as part of Project Sunrise. Airlines can offer meals and eating and hydrating guidelines to help passengers. 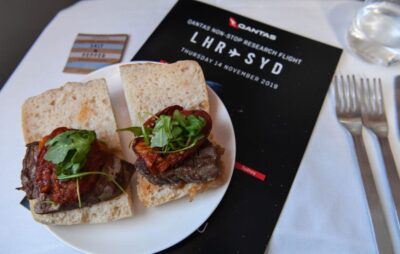 Long-haul on a narrowbody as well

It’s not just ultra long-haul flights that will introduce new onboard experiences for passengers. An even more noticeable shift from many airlines is the use of narrowbody aircraft for longer routes. The A321LR already has started this, but the upcoming A321XLR will take it much further – hopefully entering service in 2023. 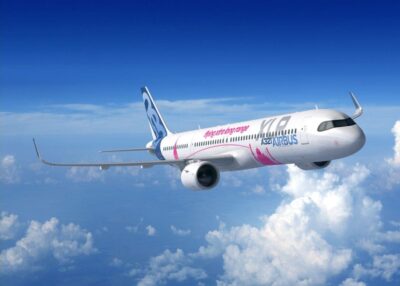 It will offer a range of up to 4,700 NM (8,700 kilometers). This opens up plenty of current long-haul widebody routes to narrowbodies. Transatlantic for sure, but also transpacific routes from Asia, and plenty of options from the Middle East. 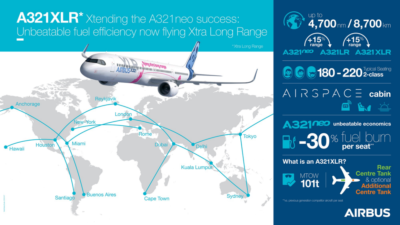 Just some of the routes the A321XLR could operate.

This brings different challenges for passengers than the lengths of the ultra-long-haul routes. Narrowbody aircraft have much less space to offer, and even eight-hour flights could be uncomfortable in standard economy (for the crew and passengers). Again, there are more innovations underway in business class but limited possibilities in economy.